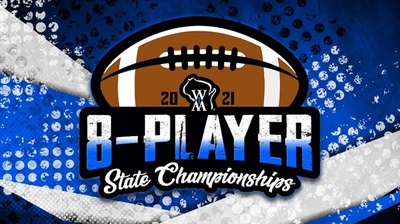 KEY DIFFERENCES IN THE GAME: In addition to only eight players on the field for each side, the game differs slightly from the 11-player format both in the field configurations and playing rules. The eight-player field is 40 feet (13.3 yards) and the distance between the hash marks are narrower than the 11-player field. The playing rules differ from 11-player in that there must be at least five players on the offensive line of scrimmage at the snap. Each player that is at the end of the line of scrimmage and each of the three players behind the line of scrimmage are eligible and may have any legal jersey number.