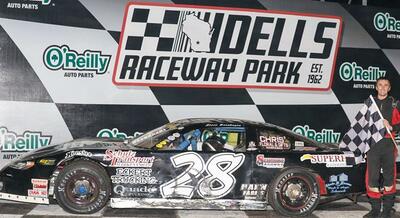 Wisconsin Dells WI 9/11/21 - Jesse Bernhagen of Willard had one Late Model feature win to go along with 9 top fives and 9 top tens out of 10 races to capture the 2021 Weekly Late Model Season Championship at Dells Raceway Park Saturday night.

Bernhagen came into the final points night with a 24 point lead on Portage driver Mike Lichtfeld and things were looking up until practice began in the early afternoon. As Bernhagen's night began and he went out to warm his hot rod for the nights events something was a miss in the motor and Jesse had to shut it down and borrow his brother's car for the night. Jesse would qualify and race well as he finished fourth in the Kalahari Resorts 50 which was good enough to maintain a 15 point advantage over Lichtfeld for the 2021 Late Model Season Championship. Bernhagen bested a field of 56 Late Model drivers at Dells Raceway Park throughout the 2021 campaign for the Championship.