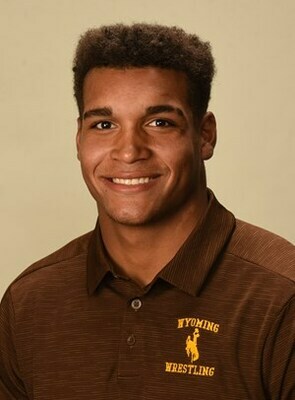 Stephen Buchanan became Wyoming's 36th NCAA All-American on Friday inside the Enterprise Center in St. Louis, Mo. He is the 13th Cowboy to earn All-American honors during the Mark Branch era.

"Having Stephen come in tonight and be an All-American is what we talk about all year. That's what it's all about great thing for the program and a great thing for Stephen" Head Coach Mark Branch said "Now we will refocus and try to get his hand raised one more time tomorrow."

In the quarterfinals at 197 pounds Stephen Buchanan faced No. 1 Myles Amine (MICH). Buchanan would hang with his top seeded opponent pushing him to the brink before losing a tight 7-6 decision.

Buchanan's loss would set up a win or go home match against No. 19 Thomas Penola (PUR). Buchanan scored a late first period takedown and controlled the match from there, winning 6-2.

He is the first Wyoming All-American since Bryce Meredith and Montorie Bridges in 2018.  Buchanan will wrap up his NCAA Tournament tomorrow against No. 15 Michael Beard (PSU) in the seventh-place match.

Jacob Wright's incredible NCAA tournament run ended just short of All-American honors, with a 10-2 loss to No. 5 Kaleb Young (IOWA) in the blood round. Wright entered the weekend as the 23 seed and was match away from earning a top-eight spot.

On the consolation side of the bracket Hayden Hastings picked up a win over No. 13 Jackson Hemauer (UNCO), who defeated Hastings at the Big 12 championships. Hastings exacted his revenge in dominant fashion controlling the match from whistle to whistle, winning 8-1.

At heavyweight, Brian Andrews knocked off No. 19 Josh Heindselman (OU). Tied 1-1 in overtime, Andrews struck fast and left no doubt scoring a big takedown off of a strong-double-leg shot.

After the second day of the NCAA Championships sit in a tie for 25th with 15.5 team points. The placing rounds will start tomorrow morning at 9 a.m. MT.