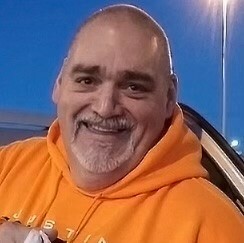 David Kronberger, aka Cleaver, age 60, of Neillsville, WI passed away peacefully in his sleep on Wednesday, October 12, 2022, at his residence.

David Lee Kronberger was born on March 31, 1962, in Neillsville, WI the son of Wayne and Ruth (Burr) Kronberger. He attended Neillsville Public Schools, and while in school he worked trimming trees, and began working at Bob & Caryl’s IGA. He graduated from Neillsville High School in 1980, and then worked as a meat cutter at the IGA for the next 16 years. From there, he went to work for Nelson Filter, now known as Cummins Filtration. He worked at Cummins for 25 years, working his way up to Supervisor of the Mold Technology Department, before retiring on April 1, of this year. While working at Cummins, Cleaver also ran “Cleaver Custom Cuts”, processing deer out of his garage for his many friends and family. He married the love of his life, Gayle Stumpner, on September 8, 1984, in Loyal, WI. They became inseparable over the years, very often enjoying their time following drivers on the local racing circuit and taking long rides through the countryside in their custom PT Cruiser Pace Car that they won in a drawing.

Cleaver was a former member of the Neillsville Lions Club. He enjoyed his many years on the softball diamond, and even cooked for the team after his playing days were done. Many of his former teammates went on to become life-long friends. He and Gayle also became huge fans of the local stock car racing circuit. They followed their favorite racers from track to track, and had deep friendships with the drivers, crew members and their families.

Cleaver was an avid Green Bay Packer and Milwaukee Brewer fan. He also loved to cook and smoke meats. His Facebook posts often showed what he was smoking or included trivia about the Packers or Brewers.

Cleaver was a gentle giant with a personality larger than life. He always had a story to tell and loved to talk about the Packers and Brewers. He loved his family very much, was so proud of his children, and loved to show off his granddaughter, Everlee.

He was preceded in death by his father, Wayne, a brother, Mark, an infant sister and a nephew, Kurtis Tresemer.

A Memorial Service for Cleaver will be held at 7:00 p.m., on Thursday, October 20, 2022, at the Neillsville American Legion. Friends and relatives are encouraged to tell their stories of Cleaver, of which there are many, at the service. Visitation will be from 4:00 to 9:00 p.m., at the legion. Interment will be next to his father in the York Center Cemetery in Granton, WI.