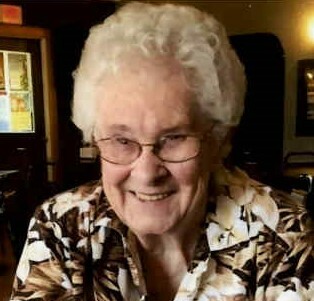 Mildred Ann Humphrey, age 90, of Neillsville, WI, died July 1, 2022, at the Serenity House, Tomah, WI, where she had resided for the last 6 weeks.  For the 7 months previous, Brian and Tami Humphrey had been her tender-loving caregivers in their home by Tomah.

Mildred "Millie" was born June 2, 1932, to Paul and Eleanor (Schecklman) Halpin in Loyal, WI, and graduated from Loyal High School.  She met her future husband Gerald Humphrey Sr “Jerry" when Millie's brother introduced them at Coloma, WI. and they were married in Wautoma, WI on November 26, 1949.   They moved to Franklin, WI, and lived there for six years where they lived with their first three sons.  In 1955 they moved to Chili, WI, where six more children were born--two daughters and four more boys.

When her last child was a high school freshman, Mil got a job in housecleaning at the Marshfield Hospital where she worked until 1994 making many life-long friends.  Jerry and Millie sold their Chili farm in 1993 and moved to Neillsville, WI, where they shared their lives together.  Upon retiring, they traveled a lot throughout the USA.

Playing cards with anyone was fun and her nieces came up from Plainfield often to gamble for “big” money— nickels and dimes.  Mil enjoyed her neighborhood coffee group and welcomed any visitors--friends or relatives-- at any time.

Ya done good Ma!  We love you!