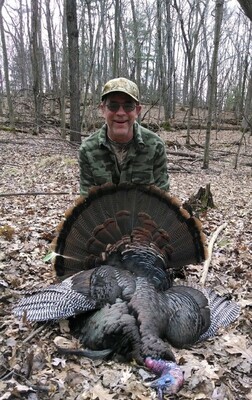 Richard John Tomasello was born on May 23, 1952, in West Allis, WI the son of John and Shirley (Bye) Tomasello. He attended Nathan Hale High School in West Allis, graduating in 1970, and then went on to the Milwaukee Area Technical College, where he studied Tool and Die making. Rick was united in marriage to Carol A. Bauer on August 24, 1974, at St. Mathias Catholic Church in Milwaukee, WI. They lived most of their lives in the Milwaukee area, where he worked as a tool and die maker. He retired five years ago, and in 2017 they moved to their new home in Neillsville.

Rick was a member of St. Mathias Catholic Church in West Allis, WI. When his boys were younger, he served as a Boys Scout Leader. He loved duck hunting and deer hunting, both bow and gun season, especially as his boys got older and became more involved in the sport. As Rick’s illness became more progressive over the years, he appreciated that the Rock Creek Disabled Outdoors organization allowed him to continue to pursue his passion for hunting.

Rick was a perfectionist. He could make anything or fix anything, and what he worked on always came out flawless. Of all the things that he made over the years, though, he was most proud of, had the most love for, and was the most dedicated to his family. They were the love of his life.

He was preceded in death by his parents and his mother and father-in-law.

“May your steps be light and powerful. Walk on.”