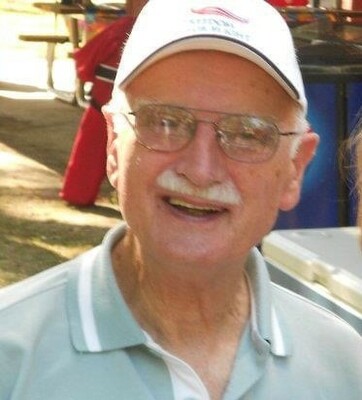 Harold Beyer was a man with a knack for making everyone feel at home. Quick to laugh and slow to judge, Harold was a “social butterfly” by nature. He embodied the axiom that long after people forget what you did, they will remember how you made them feel. Born August 6, 1922 in Pine Valley, Clark County, WI, he was the son of Richard and Hattie (Meihak) Beyer. He received his elementary school education at St. John's Lutheran school in Neillsville and graduated from the Neillsville High School in 1940.

Coming of age during the Great Depression, Harold often said, if he or his siblings wanted something, they had to make it themselves. When they wanted to go skiing one winter, they made skis by sanding down scrap boards, then steaming and weighing the tips to get the proper curl at the front of each ski. From downhill skis to dandelion wine, the family made what they needed, even if jobs and money were scarce.

Harold met the love of his life, Helen (née Meier), at the end of his high school years.

One afternoon, coming home from ice skating, Harold and Helen found her family gathered around the radio: it was December 7th, 1941, the day of infamy. After the bombing of Pearl Harbor, Harold knew that he would be drafted into the Army. By the time he left for basic training in 1943, Helen and Harold were married and their first son, Harold Jr or Bud, had been born. Harold, Helen, and Bud lived from July to December of 1943 in Blackstone, VA. close to Camp Pickett, where Harold was then stationed. On their return home, Harold shipped overseas and served in England, France and Germany. Harold’s army detail was on a supply company, supplying munitions to soldiers on the front lines. One night somewhere in France, his outfit was attacked by German bombers. As the men scattered from the trucks they had been riding in, taking shelter at the base of a wall alongside the road, the bombs began to rain down. One hit close to Harold, blowing him high into the air. He survived, but the only thing recovered from the man huddled next to him was his legs. Speaking of the event sixty-plus years later, Harold’s voice would still become strained with emotion.

For his wounds, Harold received a Purple Heart. But his war effort did not end there. Harold was sent back to the company, eventually ending the war in Nuremburg, Germany during the trials of the major surviving leaders of the Nazi party. Harold described a city in ruins, with the streets simple ruts that had been bulldozed through the rubble. It was there that Harold was reunited with his brother Walter, who had also been in the service. There were unsubstantiated reports that Harold may have been late to guard duty after a night of celebrating with his brother, but we may never know the truth of that one.

After returning stateside and being discharged from the army at Camp Ellis in Illinois, Harold had one goal; head north, back to Wisconsin and his family. After a short stint as a plumber’s apprentice, Harold found work at the new Nelson Muffler plant in Black River Falls. Soon, Harold was in a management position. From there, he worked for Nelson in Mineral Point, then in their home base of Stoughton. He did whatever was asked of him to the best of his ability, from managing a plant to overseeing shipping and receiving at the flagship office. He even saved their bacon by going to Detroit and fixing a shipment of mufflers that had not been manufactured to specifications. He was a jack of all trades for the company, and many people who worked with him spoke fondly of his leadership.

But the twin passions of Harold Beyer’s life were his family and his faith. His daughter, Becky, was born in 1948, and another son, Landon (Lanny) came along in 1949. While Helen maintained the home, Harold worked to make sure his family was taken care of. In the early 1960s, he was able to build a home in Stoughton with room enough for the whole family. The house on Yuma Circle became a gathering point for his children and their families as the years passed.

Harold and Helen’s commitment to family did not stop with their children. When grandchildren Nathan and Leah, offspring of Lanny and Louise (Venden), needed help, Grandma and Grandpa stepped in. The two grandchildren spent 1978 and 1979 being raised by Harold and Helen in Stoughton. Leah, who had a rare condition called Rett Syndrome, was subject to grand mal seizures and could not walk, talk, or feed herself. It was a labor of love, and one that Harold and Helen took on willingly.

Harold held leadership positions at several of the Lutheran churches he and his family were members of over the years. At St. John’s Evangelical Lutheran Church in Neillsville, he was instrumental in hiring Pastor Tim Beibert, a fact that he was proud of. Harold’s faith was an old-fashioned faith: quiet, simple, and unshakable. His belief in God, Jesus, and the church helped him weather the many storms of life, including losing his wife and all three children in his later years.

As Harold grew older and Helen passed, son Bud came to live in Neillsville, helping Harold with day-to-day tasks. Though the arrangement was not to last-- Bud passed away in 2016-- it was proof that Harold’s love and concern for family was passed down to the next generations. Bud was a kind, generous, and smart man who Harold and the family missed terribly.

Rebecca (Becky) passed away unexpectedly in 2020, the death of his last child. Harold took it in stride, but it was a blow. They talked on the phone every week, Harold would say, often choking up at the memory. Becky and her husband David maintained a room for Harold in their Lake Mills home, and he went down there for holidays and other special occasions.

Even well into his 90s, Harold enjoyed games, particularly card games, and parties. Never one to shy away from a social event, Harold was known to play cards at the home of Ruth and Don Meihak until 1 am on Friday nights-- well after the time that family members decades younger than him were in bed, asleep. He always appreciated a funny birthday card and took the spotlight at his birthday parties with only token resistance. For all of his considerable modesty, Harold didn’t mind being the center of attention once in a while. He was also an ardent fan of the old-time country and western music and most local and state sports.

A Memorial Service for Harold will be held at 11:00 a.m., Saturday, August 6, 2022, the date which would have been Harold’s 100th birthday, at St. John’s Evangelical Lutheran Church in Neillsville. Pastor Timothy Biebert will officiate. Internment will be next to his wife, Helen in the Neillsville City Cemetery. Visitation will be from 10:00 to 11:00 a.m., Saturday, August 6th at the church.