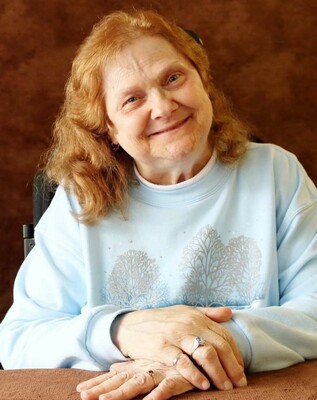 Mary Teresa Prock was born on January 5, 1950, at the old hospital in Neillsville, WI the daughter of Harold and Pearl (Hansen) Prock. She attended St. Mary's Grade School to the 8th Grade and then graduated from the Neillsville High School in 1968. In December of 1969 she began working as the medical records clerk at the Memorial Hospital in Neillsville. On August 30, 1980 Mary was united in marriage to Charles W. Diedrich at St. Mary's Catholic Church in Neillsville. They later divorced in 1987. In August of 1999, Mary retired as the medical records clerk after 30 years of service. During her retirement Mary did volunteer work at the Clark County Domestic Abuse Office located at the Memorial Medical Center.

Mary was a member and past officer of W.W.A.A.C. (Wisconsin Waubeek Associated Activities Club) a camp for the handicapped located on Hwy. 13 one mile north of Wisconsin Dells. She attended camp there every year since 1990.

She was also a member of St. Mary's Catholic Church in Neillsville, and during her spare time Mary enjoyed working on her computer, going online and chatting in the chat rooms.

She is survived by a sister, Caroline (Gene) O’Brien of Hatfield, WI, three nephews, three nieces and many cousins.

Mary was preceded in death by her parents, Harold and Pearl Prock, three brothers, Maynard, Mike and Milton; her grandparents, the Procks and the Hansens; and a nephew, Tom.

The Mass of Christian Burial for Mary will be held at 10:30 a.m., Friday, December 31, 2021 at St. Mary's Catholic Church in Neillsville. The Celebrant will be Fr. Greg Michaud. Music will be provided by Vicente Cortez, organist and St. Mary’s Choir. Interment will be in St. Mary's Catholic Cemetery. Visitation will be from 9:30 to 10:30 a.m., Friday, December 31st at the church.