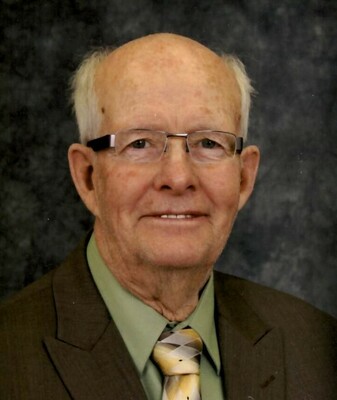 Eugene Douglas Cattanach was born on August 4, 1932 in Neillsville, WI the son of John Curtis and Clara Martha (Marg) Cattanach. He attended Granton High School, graduating in 1950. Gene then enlisted into the United States Army and served until 1952. When he returned from his military duty he farmed with his family in the Town of Fremont. On August 11, 1956 he was united in marriage to Dorothy Faye Hiles at the Zion American Lutheran Church in Granton, WI. After they were married Eugene continued to farm and Dorothy taught school for many years. Along with farming, Eugene also worked for the Town of Lynn grading roads and for the Hiles Bros. operating heavy equipment. Dorothy died on June 3, 2009.

Eugene was a member of the Missionary Baptist Church in Greenwood, WI. He was also a member of the Liver & Onions Club at Mapleworks Café in Granton. He enjoyed flying airplanes so much so that he obtained his pilot’s license after his children had grown.

Eugene was a loving father and a fun and playful grandfather. He was loved by all that knew him, and he will be dearly missed by many.

He was preceded in death by his wife, Dorothy, his son, Evan, his parents and a brother, Warren.

Funeral Services for Eugene will be held at 11:00 a.m., Saturday, December 18, 2021 at the Gesche Funeral Home in Neillsville. Chaplin Joe Ledger will officiate. Interment will be in the Town of Grant Cemetery, with military honors performed by the Neillsville Veteran’s Council. Visitation will be from 10:00 to 11:00 a.m., Saturday at the Gesche Funeral Home.

In lieu of flowers memorials in Eugene’s name may be made to: Habitat for Humanity, www.habitat.org.