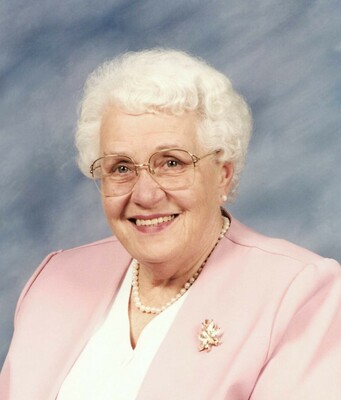 Alene Edith Marg was born on October 22, 1925 in the Town of Fremont, Clark County, WI the daughter of Elmer and Agnes (Garbisch) Marg. She graduated from Granton High School in 1942 and then moved to Racine, WI, where she worked at the J.I. Case Company as a riveter on B-52 bombers from 1944-45. Alene also worked at the Milwaukee Phone Co. as a switch board operator from 1946-47. On February 15, 1947 she was united in marriage to Ralph LeRoy Lautenbach at the Zion Lutheran Church in Granton. They resided in Granton and began to raise a family. In 1957, Alene began working as a stitcher at the Weinbrenner Shoe Company in Marshfield, WI. She worked there until 1968 when she went to work as a nursing assistant for the Memorial Medical Center in Neillsville. Ralph died on January 4, 1979 and Alene worked at the hospital until 1987. She then began a 20-year career with Figi’s in Neillsville eventually retiring at the age of 82 in 2007.

Alene was a member of the Zion American Lutheran Church in Granton, where she also taught Sunday School and belonged to the Ladies Aid. She was also a member of the South Grant Sewing Club for many years. She enjoyed reading the Bible, crocheting, embroidering and quilting. Over the years she made quilts for all her grandchildren and great grandchildren.

She was preceded in death by her husband, Ralph Lautenbach in 1979, her parents, Elmer and Agnes Marg, a sister, Ruth Marg, brothers, Curtiss Marg, Duane Marg and Erland Marg, 2 sisters-in-law, Dorothy Marg and Gladys Marg and a brother-in-law, Harvey Pischer.