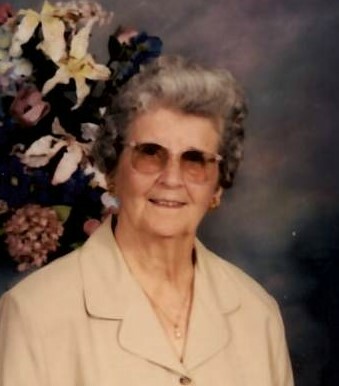 Irma Rizner was born on February 18, 1918 to Elsbeth (Baumgartner) and Rudoph Wahlen at Blanchardville, WI. The family moved to Shortville where her dad purchased the Shortville Cheese Factory. She attended the Shortville School and Neillsville High School. After graduating from high school, she was employed at The First National Bank, working there until 1942 when she and William Rizner were married on June 14, 1942. They lived in Chicago, IL for a little over a year then moved back to Neillsville and she again worked for the bank until 1945. In 1947, they purchased Bill’s home farm. Irma worked part-time until 1962 when she was employed full-time by the Neillsville Production Association. She worked there for 17 ½ years until retiring on March 1, 1980. After retirement, they spent some time traveling.

Irma was a member of the United Church of Christ in Neillsville.

She is survived by a son, Roger (Donna) Rizner and a daughter, Elsbeth (Robert) Johnson.

She was preceded in death by her husband, her parents and a sister, Nellie.

A private Graveside Service for Irma will be held at Neillsville City Cemetery.