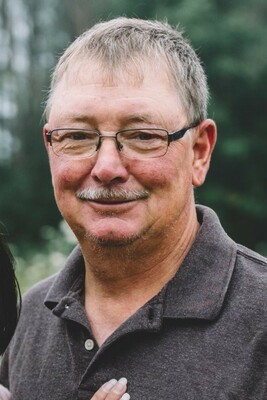 Russell James Opelt was born on August 3, 1964 in Neillsville, WI the son of Kenneth and Ruth (Burfeind) Opelt. He attended St. John’s Grade School and Neillsville High School, becoming Neillsville’s first state wrestling champion in 1982. He graduated in 1983 and then began working for Bob Knoop at Knoop’s Tree Farm. Later, he went on to driving semi-truck for Steve Knoop in Neillsville and then McNulty Trucking in Black River Falls, WI. On December 14, 1991 he was united in marriage to Jill Hagen at St. John’s Evangelical Lutheran Church in Neillsville.  Russell eventually began working for Mathy Construction, but always wanted to be home for his family so in 1999 he took a job with the Clark County Highway Department. He loved his job with the highway department and the people he worked with and took great pride in his work.

Russ was a member of St. John’s Evangelical Lutheran Church in Neillsville and a former member of the Neillsville Men’s Club. He enjoyed camping, hunting for the “big” bucks and fishing, making maple syrup, picking berries and canning with Jill. He also loved the Green Bay Packers and watching their games with a group of friends on “Sunday Fun Day”. Most of all, though, he loved his wife and family more than anything in the world, and everything he did was for them.

He is preceded in death by his parents, two brothers, Keith and Kevin, an infant brother, Glen, a brother-in-law, Gary Fitzmaurice and his mother-in-law, Patricia Hagen.

Russell was the kindest, most soft spoken, strongest “little” man out there that you will ever meet, and he was always willing to help anyone and everyone that needed assistance. He was loved by so many in our community and will be dearly missed.

Funeral Services for Russell will be held at 11:00 a.m., Friday, August 13, 2021 at St. John’s Evangelical Lutheran Church in Neillsville. Pastor Timothy Biebert will officiate. Interment will be in the Neillsville City Cemetery. Visitation will be from 4:00 to 8:00 p.m. Thursday, and the family has asked for a time for friends and relatives to share their stories of Russell beginning at 7:30 p.m. at the Gesche Funeral Home in Neillsville. Visitation will also be held from 10:00 to 11:00 a.m. Friday at the church.