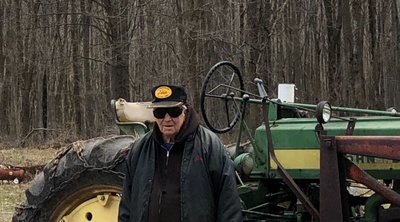 Quentin Ira Hagen was born on July 15, 1944 to Herman Hagen Jr and Helen Rebecca (Salomonsen) Hagen at the Greenwood Maternity Home.  He began his work career on Richard and Viola Buchholz’s farm.  From there he began his truck driving career with Boon Brothers Construction, Hediger Dairy, Schneiders and Neillsville Coop Transport.  After the Transport closed, he drove for Ruan and bought a semi and worked for Whitehall.  Then began Quentin’s construction career as a heavy equipment operator working for many companies thru the union hall and retiring from Hoffman Construction.  He belonged to the Teamster Local 662, the Operating Engineers Local 139 and the VFW for his service in the United States Army, serving in the Vietnam War. After returning from Vietnam, he met Kathy Carl and they married on January 17, 1970 at St. Mary’s Catholic Church in Neillsville. Above all he couldn’t get enough of John Deere Antique tractors.  He loved putzing around them and driving down to the woods to cut firewood.  Quentin so enjoyed the woods.  He also loved his coffee buddies and he couldn’t start a day without a trip to town to see them.

He was preceded in death by his parents and a sister, Karan Peters, 2 brothers-in-law, Don Turner and Henry Kuester, a sister-in-law, Patricia Hagen and his In-laws, Arnold and Florence Carl and brothers-in-law, Ken and Ronnie Carl.

God saw you were so tired and took you home to rest.  We will see you again.  Loving and missing you lots.