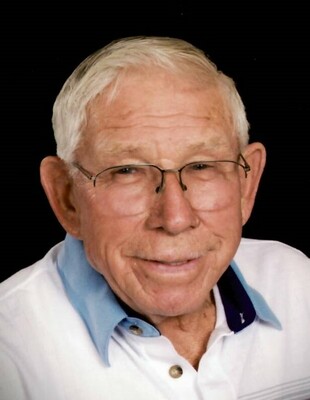 Irvin August Marg was born on May 15, 1931 in Neillsville, WI the son of Edward and Lillian (Hagedorn) Marg. He attended Pine Valley Mound School and then St. John’s Lutheran School for three years. He was baptized at St. John’s and was later confirmed there alongside his two brothers. He graduated from Neillsville High School in 1949 and then, proudly, enlisted into the United States Air Force, and completed his four years of service to his country, serving from November of 1950 to November of 1953. Irv was united in marriage to Lois Larsen in 1955. After his honorable discharge, he joined in the painting business with Frank and Bill Simek Painting. Eventually, Irv took over the business and it became known as Irv Marg Painting and Decorating. During those years, he also had a milk (house to house) route and owned and ran a tavern south of Neillsville called Irv and Lois’ Bar. Lois died unexpectantly in 1991 and Irv married Glenna Rhoades on December 17, 1994. He retired in 1996 and sold the business to Jeff Kleiforth.

Irv was a member of St. John’s Evangelical Lutheran Church in Neillsville. He belonged to the American Legion for over 60 years, holding local, district and state offices during that time. He was a life-member of the VFW and a member of the 40/8.

Irv was an avid sportsman. He taught his children and grandchildren the wonder of the Great Outdoors, which included hunting, fishing, golfing, and the art of making maple syrup. He loved his family and friends and good conversation.

A Celebration of Life Service for Irv will be held at 11:00 a.m., Saturday, May 22, 2021 at St. John’s Evangelical Lutheran Church in Neillsville. Pastor Timothy Biebert will officiate. Music will be provided by Judy Trunkel, organist. Interment will be in the Neillsville City Cemetery with military honors performed by the Neillsville Veteran’s Council. Visitation will be from 10:00 to 11:00 a.m., Saturday, May 22nd at the church.

A private memorial service for immediate family members will be held at the Gesche Funeral Home in Neillsville.